Hijab - The enmity within 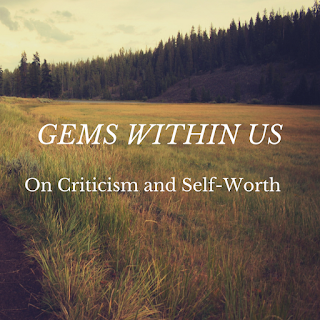 Gems Within us: On Criticism and Self Worth

Imagine you were offering one of a kind, rare and beautiful gems. You know their worth and you truly believe in them. You love them so much; you’d like to share them with the rest of the world. You know if put to right use, these gems can offer so much more! They catch someone’s attention. They stop for a moment and what to know more. You start talking. You tell them all about their beauty and qualities. They decide, not to take them. Maybe the time isn’t right for them. They are on their way to something they believe is more important. Maybe they were too distracted at that point to truly appreciate their beauty or listen to you. Whatever it might be, you don’t mind. You let them go. You truly believe in what you have to offer and you know someone will appreciate them for what they are.  Time and time again, we keep forgetting that we are like these rare gems. We are truly beautiful and unique. We all are different and have something to offer. There are people in our lives who 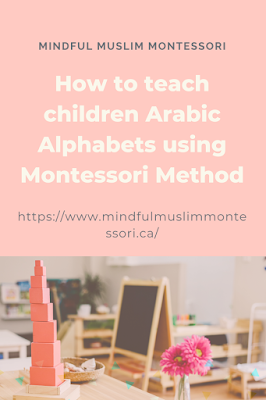 How to Teach Kids Arabic Alphabet - Montessori Method When I decided to homeschool my daughter a few years back, I remember being overwhelmed by all the information available. Alhamdulillah through the years, we have tried and tested a lot of methods and tried figuring out what works for my kids and what doesn’t. I believe each child is different and it’s really important that parents take time to figure out what works for them and what doesn’t. I personally found the Montessori method quite engaging Alhamdulillah! Below, I have outlined some of these methods I used with my kids and linked up some resources that you could use to teach your kids the Arabic Alphabet. The Three Period Lesson: I have used the three-period lesson to introduce Arabic Alphabets and vocabulary to my kids and it works really well Alhamdulillah. During the first period, your aim is to introduce 1 - 3 letters to your child! Repetition is key so make sure you say the alphabet multiple times

My soul is lost, my body is in pain. For I’ve been searching for too long, looking around in vain. A battlefield inside me As I fill the vessel with things of the world. But there is a piece of flesh inside me Not content by anything of this world. It's looking for more I quieten it but it roars. It yearns for something else Its nourishment is remembrance of Lord My heart desires nothing else. But to meet my Lord. I’ve lied to myself for way too long Putting worldly things in my heart where only Allah belongs. So my heart aches as I bow down to Him I turn to Him before I return to Him. I submit, I cry and I repent to Him. For forgetting my purpose once again. For depriving my own soul again and again. I take a vow to put Him first. For nothing of this world can quench my thirst. As I pray to Him, peace fills me. And I remember the one who created me. For way too long, I've tirelessly roamed But I’m thankful to Him for I’m finally